After running 13.1 miles on Siesta Key Beach at the end of June in 90 degree weather and high humidity. It was time to go north to the White Mountains to work my legs in a different way as I prepare for the long run across the Grand Canyon. My older brother, Dick, is an avid hiker and a member of the New England 4000-Footer Club which includes all 48 peaks in the White Mountains. He has asked me for years to do some long hikes with him, but with my past summers filled with one-mile speed races I could not partake in these journeys. However, this year is a different story. I am hiking The White Mountains in New Hampshire and Mount Katahdin in Maine and then running the 20 mile dress rehearsal through the mountains of Vermont. I thought this would be a great way to prepare for the rigors of The Grand Canyon. Steep ascensions and descents are a great way to strengthen parts of your legs that are often missed. Balancing on a rock or a dirt edge tests your ligaments and muscles around the joints of your lower extremities as you strengthen through vertical stabilization. Dick and I were planning to hike the Presidential Traverse which is over 20 miles, but Hurricane Arthur had other plans for us. 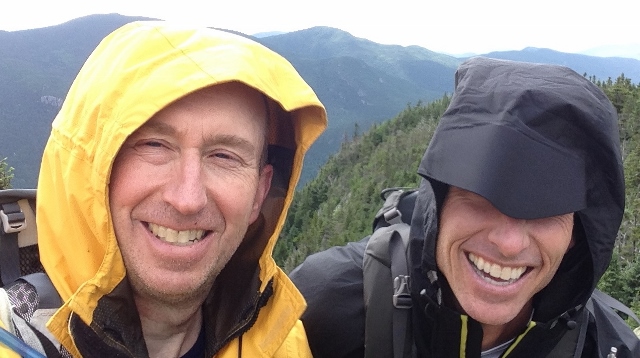 When Dick awoke on Saturday morning, he came into my room to tell me about the change of plans. The back winds of Hurricane Arthur were still looming in the northeast United States. The winds on the top of Mount Washington, the highest peak in the northeastern US just over 6200 feet, were gusting over 100 mph. Now 100 mph pales in comparison to the world record in 1934 that Mount Washington once held for wind speed measured at 231 mph, but we could not chance the exposure that the high traverse entails hiking over Mount Adams, Mount Jefferson, and Mount Washington. Instead, we stuck to lower peaks and under tree levels. We hiked up to Mount Eisenhower, Mount Jackson, Mount Pierce, and the Webster Cliff trail. The views were tremendous but so was Hurricane Arthur (with 60 mph gusts on Eisenhower) as can be see in the video and photo on Webster Cliff later in the day. It was a great day of training with Dick as we covered 13 miles of wet, windy, and slippery trails.

Our plans were supposed to take us to Israel later this month, but with all that is happening there it is postponed to a future date. We look forward to the next training hikes and runs in August, but this time without any hurricanes. At www.OneMileRunner.com, we just migrated our blog site to Word Press. Please let us know what you think of the new format.