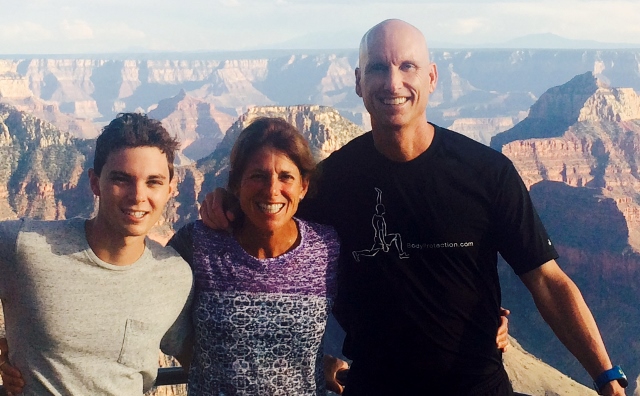 After months of training in the northeast mountains, it was time to fly from Tampa to Phoenix on September 11th. Loosened up on a couple of one hour runs in the dry heat of Phoenix, then traveled to Prescott to meet the rest of our party. Kim Sheffield and her nephew Maxwell Allen were running. My wife, Sekyen, and Kim’s husband, Mark, were the support team. It took us about 6 hours to drive to the picturesque North Rim of the Grand Canyon. This was my first time driving to the north side of the Grand Canyon. It is much more scenic than the entrance on the south side. We spent the night in cabins on the Grand Canyon Lodge. It was early to bed and early to rise as we slept around 930 and awoke at 4 to start our preparations. Oatmeal, walnuts, and a banana was all I needed for breakfast. A hot shower and a body rub with The Stick and then we all traveled about 1.5 miles to the entrance to the North Kaibab trailhead. We waited for the sun to lighten up the atmosphere in order for us to see our feet. We all formed a circle, held hands, and said a prayer to begin our day. We walked for a few minutes down the North Kaibab trail at 8,250 feet. Then we began our run passing by 7 hikers that started before us in the dark as we descended into the Canyon with the Douglas fir and Ponderosa pine all around us.

Kim and Max were “yahooing” down the Canyon trails hearing the echoes off the granite and sandstone walls. It was a wonderful start to the day. We ran past more hikers who stayed at Cottonwood Campground the night before. We ran through the man-made Supai Tunnel at about 6,800 feet, past Roaring Springs about 5 miles in, and through Cottonwood Campground at about 4,000 feet approximately 7 miles in to the run. After Ribbons Falls at 3,720 feet, we arrived at my highlight of the Grand Canyon run – “The Box.” The so-called “Box” is roughly a 4 mile stretch of trail that runs along Bright Angel Creek with 1,000 foot walls along your side. We were at times flying through this part of the trail as we took advantage of the shade and the stable footing. We completed the roughly first 15 miles in about 2 hours and 45 minutes arriving at Phantom Ranch at 2,480 feet. I smashed my left big toe on some rocks (and the front of my shoe due to the sharp 6,000 foot descent), but this part of the run was extremely enjoyable with the difficult part just ahead after we cross the Colorado River and work our way up the wall of the South Rim.

The last 7 miles is the challenge of the rim to rim run and we did not make it any easier by choosing the wrong trail to go up the South Rim. We chose the South Kaibab trail thinking we had enough fluids to run up, but we were wrong. The South Kaibab trail has no water supply, it is BYOW (bring your own water). It is also a very steep terrain which is not good for running. Only go down the South Kaibab trail (if starting on the South Rim) as the Bright Angel Trail is much better to climb. It has 3 water stops, some shade, and (although a bit longer than South Kaibab) a more conducive trail to run on with smoother switchbacks in order to ascend the 5,000 feet of elevation out of the Canyon.

At times on South Kaibab, it feels like your running is not faster than your hiking. So there was a mix of run/hike at this point. Then Kim felt sick from heat exhaustion with about 4 miles to go. With the slower pace, increased heat, and rising elevation, we were in trouble. She vomited and continued putting “one foot in front of the other” (in the words of encouragement from Max). Kim called it the “death march,” but she persevered and showed her incredible toughness. We ran out of liquids due to this portion of the run taking longer than expected. Thanks to the generous hikers coming down the Canyon and Mary, the wonderful ranger positioned at Cedar Ridge, we were able to receive more liquids. After another 3.5 hours for Max and me, and another 4.5 hours for Kim (as she hiked the last 1.5 miles with Mary), we completed the trek from the North Rim to the South Rim. With the problems on our ascent, it took us longer to complete the last 7 miles than the first 15 miles. 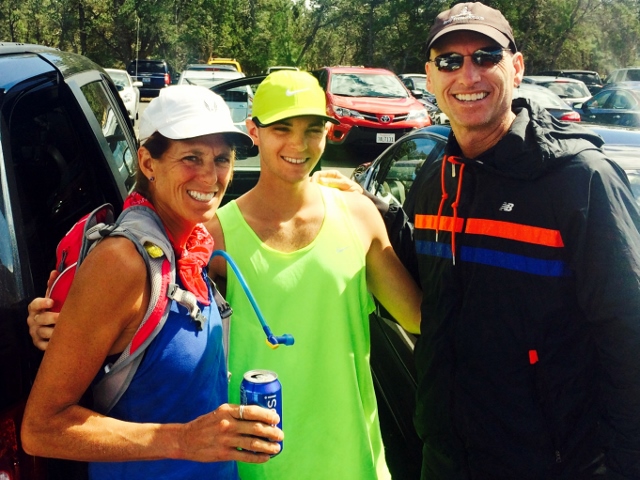 The roughly 22 miles through the Canyon had majestic views and sites we will not soon forget. It is now time for a bit of recovery and after a summer of training and running at elevation, to return to sea level on the Sarasota beaches.