“Yeah David” the onlookers would yell in languages he didn’t even understand, but that’s not where this adventure begins. This adventure begins in Sarasota, FL where David visits me weekly for therapeutic and sports massage.  My job is to keep him ready for high performance and injury free.  This makes for a difficult task as he sets out around the world to accomplish his feats of speed.  The adventure, Around the World In Under 30 Minutes.  This entails running 6 one mile races in 6 weeks in 6 continents in under 30 minutes.   My challenge was to bring David the therapeutic and recovery effects of massage as he jet sets around the globe.  How would I do that when I’m here in Sarasota, FL and he is abroad?  That answer became apparently easy.  As a practioner and educator of Massage Cupping Therapy, I would instruct David on the many uses of a single silicone cup.  He would use this cup in the shower with soap before and after his events and training.  The true testament would be how his body felt when he got back and on my table.  David set out on a feat of speed Around the World in Under 30 Minutes with one cup, 6 continents and a multitude of uses.  This would be my contribution to this running endeavor of speed.

Pre-race massage usually consists of some gentle rocking and/or shaking to loosen up the muscle and get some blood flow to the tissue.  What I would ask David to do pre-event is done in the shower.  The tool I had David use is a Russian-made bell shaped silicone cup that measures 3 inches at the opening.  While in the shower before each event or training, David would lather up the areas of focus with soap.  For David, this would consist of the gluteal area and the legs.  Taking the bell shaped silicone cup in hand, gently squeeze and release once on the lathered skin and begin gliding.  This creates a vacuum that lifts the tissue and penetrates deep into the muscle as it glides over the soapy skin.  Starting in the gluteal area, begin working in a circular motion.  The cup can be moved in any direction or parked for a few minutes over a particularly tight area.  For a runner, it is usually the piriformis and the gluteus minimus.  Then follow with the same suction glides over the thigh then lower leg and finishing with strokes towards the groin area.  The purpose of doing Massage Cupping before the event is to bring blood flow to the muscle tissue.  With this method, you can feel it warming the tissue as it brings the oxygenated blood into the tissue.  This blood flow is evident by the pink hue found in the skin.  This is particularly important prior to a one mile event.  When running at such speed, it is vital that the muscle be properly warmed up.  Using the silicone cup prior to such speed will effectively warm the muscle and prevent it from seizing up during the race.

After an event of this speed, the tissue is flooded with lactic acid, and very fatigued.  I find that using Massage Cupping with the silicone cup post event will effectively flush this out.  This simple process will clear out old debris and lactic acid that occurred during the race.  This allows for quicker recovery and the ability to get back to training sooner by decreasing the delayed onset muscle soreness (DOMS).  Once again, in the shower, repeating the same area and stokes to achieve the flushing of the muscle tissue.  With the function of the vacuum effect created by the cup, water is pulled from the cellular level into the muscle tissue helps to hydrate the tissue.  It is because of this that it is important to drink healthy amounts of water.  This is the same as in any post event recovery.

As six weeks had passed, I am sure for David the flying, car rides, remote locations and time zones made for one great adventure!  David was successful in completing his 6 miles in 6 weeks in 6 continents in under 30 minutes . . . injury free!  Once back in Sarasota and on the massage table, I was amazed at how well his body held up.  David truly went the distance.  With one cup, six continents and a cup with a multitude of uses.  I know what will be in his travel bag when traveling far from home.  For David will be traveling the miles while going the mile.  I can’t wait for what adventure lies ahead . . . to be continued!

You can find out more information on Stacie Nevelus and her work at www.stacienevelus.com

One of the ways I have been helping my recovery process is to have acupuncture sessions with Dr. Qinghong Han. 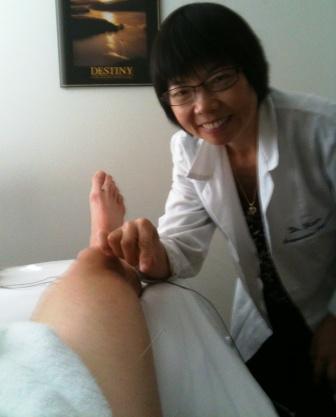 Since our knee cartilage has poor blood flow, I have been using acupuncture to stimulate energy or “chi” in my knees and throughout my body. I am hoping that with the improved circulation in my knees that it will aid in the complete healing of my knee joints during this off-season and will bring my entire body to a more balanced state. 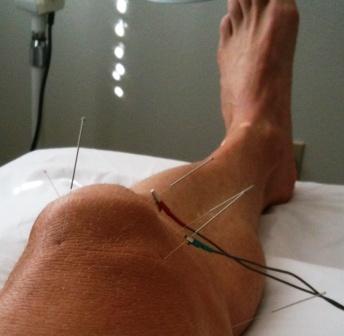 Perhaps you can try acupuncture to reduce inflammation, relieve pain, or optimize your overall heath. To find out more information about Dr. Han and the benefits of acupuncture, please visit www.doctorhan.com.

The second stop on our recovery tour is seeing your trainer to add to your off season workouts. My themes for this fall was to increase my flexibility and to bring balance back to my body after our world tour. The www.OneMileRunner.com Training Consultant, Juan Ruiz-Tagle, gave me new 3-D stretches that I perform at the conclusion of my workouts. Juan is very knowledgeable and has revamped my recovery. We train movements, not muscles. The western world is into isolating muscles in a stretch. However, isolation does not transfer to your chosen sport or activity. When moving, we use groups of muscles. If you look at the body, there are our layers of muscles in action in every exercise. Muscles are not one-dimensional, but multi-dimensional. That is why the 3-D effect works so great. 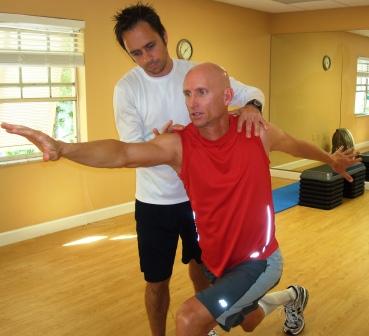 I wish you the best with adding to your off season program to ensure that you are not only recovered fully before your new training program begins, but also that you have made improvements in your areas of weakness. You can check out Juan’s blog entries at backtofunction.blogspot.com.

The cool weather finally hit Florida last week. Local races are beginning their competitive season and runners are preparing for their Thanksgiving Day race. I, on the other hand, am treating these couple of months with recovery and balance. I begin my speed training on February 1st for the Chinese race in May. I have not had a few months away from running, training, and speed work for a few years, so it important for my longevity and health to take these short couple of months and recover properly. At www.OneMileRunner.com, we will begin a series of blog articles sharing some of the ways I will be recovering over the next couple of months. I hope you can find some of these methods useful in your training periodization programs.

Finding body balance is crucial before the speed work begins again. With my hips and pelvis being the platform of power, I am going through a series training exercises to increase my range of motion and my overall strength. Our first stop will be at Wellness Concepts (www.wellnessconcepts.com) located in Bradenton, Florida. A friend recommended I meet Dr. Greg Kotlarczyk to see if he could help me find the recovery I was looking for after our world tour this summer. Dr. Kotlarczyk, fondly referred to as “Dr. K,” has been instrumental in bringing my entire body back into balance. With his numerous PNF stretches, neuromuscular massages, and chiropractic adjustments, my body is beginning to hold onto some of the corrections.

As we age and continue our hard training, more and more body work must be done to improve performances, avoid injuries, and optimize efforts. I spend many hours a week doing strength exercises and flexibility exercises, as well as hitting the tables for massage and other rehab work. In our upcoming series, we will show our all our stops on the recovery tour. Please treat this like a buffet – you can choose what you want to add to your plate of overall body balance.

This is our final video clip from our photo and video shoot this past May in Monument Valley, UT. This final video clip in the snow shows a couple of our 3-D exercises that we do after our races. At www.OneMileRunner.com, we believe to elongate the muscles (also called “stretching”) only after exercise – not before. If you want to bend a piece of metal, you better heat the metal beforehand, otherwise it will crack and break. Our muscles are the same way.

You should empty you lungs of all the air when doing these stretches. This will allow you to get as deep as possible into the stretches. Many people stretch on the ground. When sitting down, it does shut off certain muscles.  So this is why we do all of our elongation above ground against gravity. This will also transfer better to any of your sporting activities.

I hope you enjoyed our series training videos this year. We will be shooting our new fitness DVD in 2011. We are excited to share our entire new program with you next year. We will continue to post new blog posts each week for the rest of the year and then throughout the beginning of 2011 as we will start to focus on the training and preparations for our next event, “5 Wonders Under 25 Minutes.”