As we embark on our 4th event, many people have been asking me about how my training will be different than other years.

First, I will be expanding the exercise program that I have been using over the past few years. Not only will I be incorporating the mobilization, strength, and flexibility movements in my training, but also I will need to add even more advanced plyometric training in order to deal with the challenging terrains, elevations, and conditions unique to this tour. I will be sharing my entire training program (from beginner to advanced) in a full-length DVD fitness program at the beginning of 2012. This movement based program will be the key element to keep me injury-free as I train for 3 months and race over a 5-month period.

Second, I will be adapting my speed training to only one time a week on the track and conduct most of my speed workouts on the road or off-road conditions to match the surface I will be racing on each month. There is not much I can do about the 6000 feet elevation at the Grand Canyon in May here in Florida, but I can find places that are close to the other conditions that I will be presented with in each race.

Third, my running regimen will be slightly different as well. I will perform a weekly mix of a long run (6-9 miles), a tempo run (2-3 miles), an interval workout (varied each week), 2 recovery runs (in between the faster days), and a sprint workout (my favorite). This mix of workouts each week should provide me the speed for the mile and the strength to race the mile over and over from May to September.

Lastly, I will add another recovery session after my training with my chiropractor/massage therapist. With my heavy training and turning 48 in April, a little more time “on the table” will be beneficial to create a successful training program.

It has been a busy couple of weeks. In my last practice in Florida, I pulled a hip flexor. I still traveled to Boston in an attempt to run at Indoor Nationals. After seeing my Chiropractic Consultant in NH, Dr. Brian Bigelow, he taped my injured areas with kinesiology tape, an amazing tool  (see photo), and said to give it a shot. I ran a couple of laps, but felt the hip was tearing more so I stepped off the track. It was the right move as I have a big event to prepare for starting with our heavy training in May. I have not had many injuries in my life. It is tough to get me to slow down, but I will let things mend over the next couple of weeks. 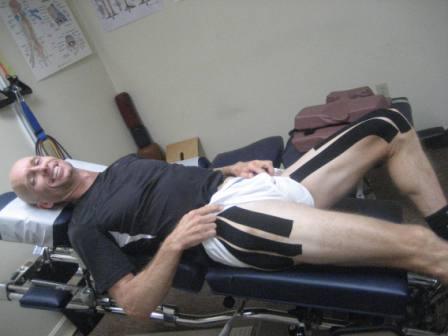 On my return to Florida, Brendan Brazier, who formulated the vegan products that I use everyday called Vega, was in Sarasota speaking about his new book, Thrive Fitness. I am sponsored by Vega and appreciate Brendan’s work in creating great products for all of us to benefit from in our nutritional intake. The Vega Optimizer is a complete whole food meal replacement made exclusively from natural, plant-based ingredients, Vega is an ideal meal for people on the go, providing high quality convenient nutrition without compromises. Vega features 25g of complete protein, essential fatty acids, fibre, vitamins, minerals, antioxidants, probiotics, enzymes and a full dose of ChlorEssence and MacaSure in every serving. 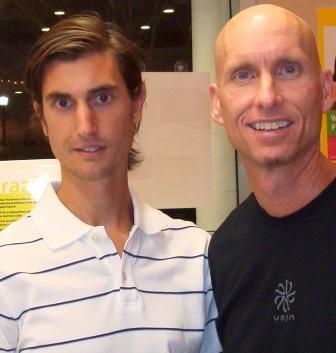 I had three talks scheduled after the race in New England on my new book, Creating Amazement. I had the chance to speak to 1000 kids at my old middle school in NH on the topic of short-term and long-term goal setting. It was a great experience sharing our message.

There are more master athletes today than at any time since the running boom of the 1970’s. Enter any race whether it is the local 5k or a sprint or Olympic distance triathlon and you will find by far the largest segment of athletes is in the master or over 40 category. This is true for bike races as well. I know this first hand as I lined up this past Sunday for a mountain bike race in the 50+ (sport master) category and there were 21 racers.

These athletes are just slightly past their competitive athletic peaks, but are still pushing their own personal limits. As the body starts to lose some of it’s strength, flexibility and aerobic capacity these athletes must do everything they can to maintain their competitiveness. They need to lift weights to maintain strength, continue with anaerobic intervals and tempo runs for endurance and speed and they need chiropractic care to keep their neuromusculoskeletal systems firing properly and their biomechanics in good working order.

Take for example the US Postal Service professional bicycle racing team who won the Tour de France seven times in a row from 1999 to 2005. They had a team chiropractor who kept them riding everyday of the grinding 3 week tour and many times the team was the only one of over twenty teams to finish with all nine members still riding (all this through crashes and the overuse injuries that arise in such a grueling event). The riders all gave great credit to the team chiropractor for “keeping them in the game”.

Another  example is football champion and all-star Jerry Rice who says chiropractic was an integral part of his long and fruitful playing career. So much so that he is now a professional spokesperson for the American Chiropractic Association.

Basically speaking, chiropractic adjustments have profound effects on the human nervous system and this is the system that controls and coordinates every function of the human being. What could be more important? Especially for a master athlete.

So if you find yourself accumulating some nagging aches and pains, instead of reaching for nsaid’s (non-steroidal anti-inflammatory drugs) think seriously about seeking out a well qualified sports chiropractor. Especially in light of recent research about nsaids that state:

Archives of Internal Medicine
“NSAIDs have been shown to delay and hamper the healing of all soft tissues including muscles, ligaments, tendons and cartilage.”
“NSAIDs can delay healing and delay it significantly.”

Multiply that with the adverse cardiovascular and gastrointestinal side effects and you are playing with fire. Why on earth would anyone, let alone an athlete, take something (nsaids) that will cover up the symptoms and cause delayed healing. Then go out and train or compete and risk even greater injury. It makes absolutely no sense at all. You are better off controlling injuries with RICE (rest ice compression elevation)

You are much better off and safer with chiropractic care, especially the master athlete.