On our travels for the North American Race in Willimantic, CT, we had the opportunity to stop in for lunch with the OneMileRunner.com Nutrition Consultant, Marc O’Meara. We had a great luncheon meal the day before the big race with his family out in his yard on a beautiful July afternoon. Here is a colorful picture of Marc’s nutritious spread: 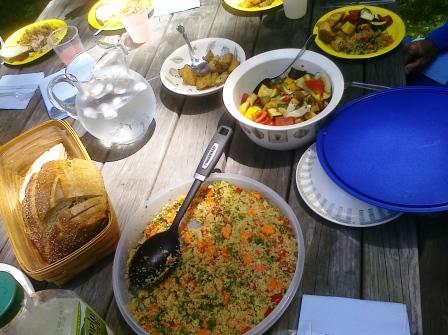 It was a wonderful way to fuel our bodies for the mile race on the 4th. You can read more about Marc’s ideas about nutrition at www.EatBalancedNutrition.com or watch the video below as we discussed after the race about what to eat the day before a big race:

Race #8 took us to Littleton, MA for the Eat Balanced Nutrition Mile. The Nutrition Consultant for the www.OneMileRunner.com website, Marc O’Meara, hosted the event on a Thursday evening. After the event, Marc made us a special “post-race” meal in order to speed up my recovery and help me heal my body for another race in a short amount of time.

Check out what Marc has to say in this video about what food is good for recovery, how soon to eat after exercise, and what our bodies need after participating in any sport:

Please visit Marc’s website at www.eatbalancednutrition.com for more information on his services.

Back in 1986, The Boom Box Parade began because the Windham, CT area could not find a band for their Memorial Day parade. The late Kathy Clark brought the idea to play patriotic music on the WILI-AM (1400) radio station. The request was too short for the Memorial Day parade, but WILI agreed to sponsor and play the patriotic music on their radio station for the Fourth of July parade 22 years ago. The host of Connecticut’s longest running morning radio show and the grand marshal for 2008, Wayne Norman, was there at the parade’s inception and it has been going ever since. It is such a unique parade with the only requirement for participants is to tune their boom box radios to WILI’s marching band music and try to wear red, white, and blue. Many of the floats are made by individuals and families in the community. It is the a chance for the community to show off their creative side.

Charlie Olbrias, the race director and the head of www.lastmileracing.com, put on a great race on a limited budget. The deceiving race course is your typical New England small town road with and up and down, up and down feel to the race. I was surprised that I ran the uphill first quarter mile faster than the slight downhill second quarter, so I was not at the time I wanted before the most difficult uphill third quarter mile. I kicked in the last quarter mile in 68 seconds and finished at 4:53. My brother and Nutrition Consultant for the OneMileRunner.com, Marc, wanted to break 6 minutes, but just missed in 6:02. My nephew Jonathan had aspirations of breaking 9 minutes and did it easily in 8:23. We had a wonderful time at the race and the very original parade before heading into Boston for the July 4th festivities.

With the postponement of the Don Bowden Mile in Stockton, CA, I had to scramble to find another race schedule the next two weeks. I decided to run two races in Pennsylvania: one in Chambersburg on the 12th and the other in Harrisburg on the 16th. That will make three races in 12 days. I also wanted to keep with the race theme that have the road mile as its featured race. Please view the race changes on my race and events page on the website. See you in PA!

Unfortunately, the answer is not simple. There is no

Eating small, frequent meals and snacks can help improve metabolism by feeding fuel to the body to burn. Your body burns energy in a similar way that a furnace burns. A furnace burns when given fuel, if no fuel is provided, the furnace can