We have finally arrived in Symi, Greece where the European race will be held this Saturday the 17th. After a 10 hour plane ride to Atlanta, 9 hour layover, 11 hours to Athens, 6 hour layover, 1 hour flight to Rhodes, and then an hour boat ride to Symi, Sekyen and I got some sleep on the 12th night. Symi is a remote island deep in tradition and history that is adjacent to the Turkey coastline. It is a small island with picturesque views. Symi was chosen due to my relationship with Tarpon Springs, FL as they are sister cities sharing cultural and political events with each other. In 2008, Tarpon Springs was my host city for the 20/20/20<5@45 event and I promised the mayor at that time that I would have an athletic endeavor in Symi in the years to follow. So here we are preparing for our race in July 2010. Here is as photo of Yilos harbor where I will be racing:

Sekyen and I had took a boat ride around the entire island today. We saw one of the most beautiful beaches in the world at the romantic hideaway of St. George. We have found internet access at small cafes in the harbor as we stay connected to the busy world outside: 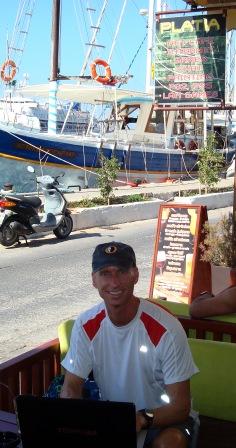 We look forward to the 3rd race of “Around The World In Less Than 30 Minutes” on the island of Symi, Greece at 8am on the 17th. I will post the video and blog of the race immediately after the race as we need to catch a boat to Rhodes, a flight to Athens, and then a flight to Amsterdam before traveling to Nigeria, Africa on the 19th.