Sekyen and I arrived in Buenos Aires, Argentina early Tuesday morning. We flew through the night from Atlanta. With only an hour difference in time zones, the time change was not that drastic. We were met at the airport by Juan Lapadula, owner of Urban Running Tours www.urbanrunningtours.com, who is running our event. Juan showed us the race course on Wednesday in Puerto Madero. Buenos Aires translated means “fair winds.” Let’s hope that the “fair winds” on this point to point race will be at my back and not in my face on Saturday morning.

Sekyen and I had the opportunity to train and to check out the beautiful, European style city of Buenos Aires. 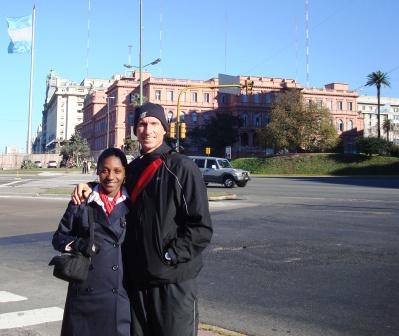 We also had the opportunity to be amongst the passion for soccer during the semi-final of the World Cup in South Africa. Even though Argentina had lost earlier (the country was very disappointed), people still entered the plaza to watch the semi-finals on the huge big screen television. We will be on a plane before the final on Sunday afternoon, but we enjoyed being part of the throngs of people supporting and cheering the World Cup. 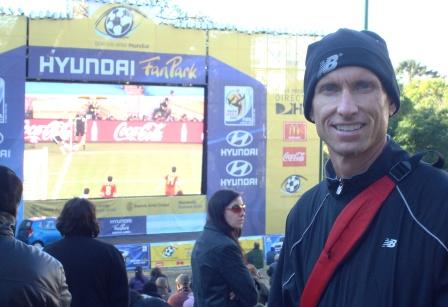 We race tomorrow morning in the cool temperatures of the Buenos Aires’ winter. Then we take the long trip from Argentina to the Greek island of Symi.