Back in Florida for a few days after training in the northeast mountains for the last 3 weeks. We began at Mount Katahdin, Maine’s tallest peak. Little did I know that I was in store for 9 hours of rock climbing and only 3 hours of hiking as we chose to cross Knife’s Edge (pictured above) – the most difficult route to the summit. We ascended the rocky Dudley trail to Pamola Peak. Then managed to get through the extremely hazardous maneuvers up and down Chimney Peak to Knife’s Edge (the name does say it all). 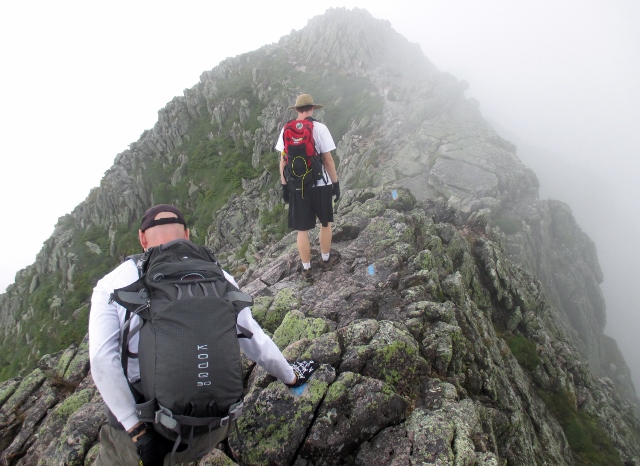 I will never choose to go this route again, but my nephew (pictured in front of me), Braedon, from Arizona loved the rock climbing aspects of the hike. So it was well worth it to experience the journey with him and my older brother, Richard. Braedon who is scared of structural heights (as he will freak out on a 30 foot rock wall with a safety rope around him), but strangely not natural heights. He had to lend me a “helping hand” a couple of times to hoist me up in order to position my foot in the next vertical spot. 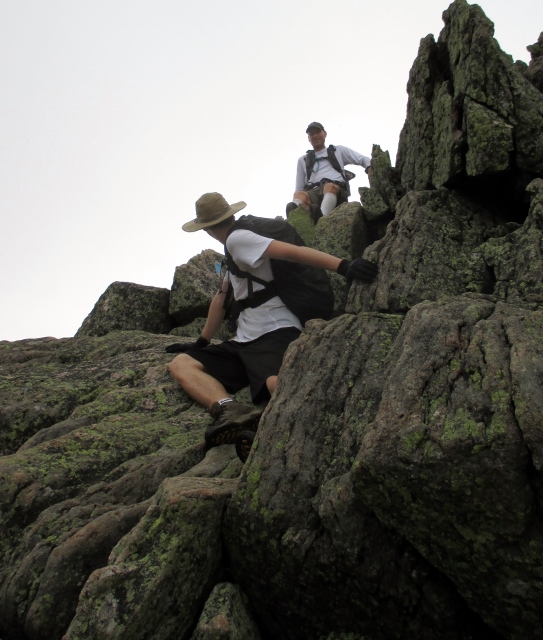 I left the long day at Katahdin battered and bruised, but void of twists or sprains allowing me to meet Kim Sheffield in the Vermont mountains for our 20 mile training run. Kim assembled a nice small group of runners to ascend and descend Mount Tom and surrounding areas around Woodstock, Vt.

Then it was onto the White Mountains of New Hampshire to tackle the full Presidential Traverse in the White Mountains that Hurricane Arthur kept us from doing in July. We started at daybreak and hiked 9,000 feet of elevation as we went up and down 7 peaks: Madison, Adams, Jefferson, Washington, Monroe, Eisenhower, and Pierce. It was 21.5 miles in 14.5 hours as we finished with our head lamps guiding us through the darkness. I now can understand how this is more a summer solstice hike as we were chasing the sunlight.  It was a long, but beautiful day. My older brother, Richard, and his friend Steve (all over 50 years old) had a lot of laughs along the way and took in some amazing sights. 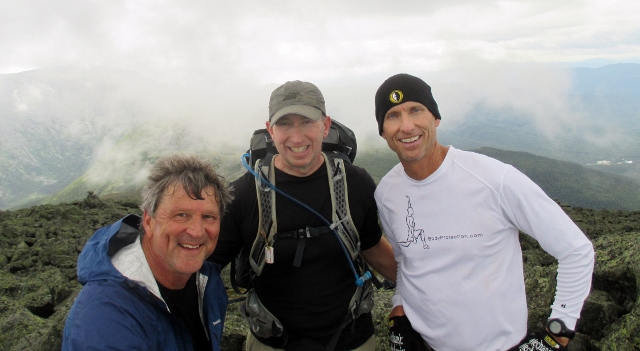 During the hikes Richard and I were discussing the necessity of advanced motor planning for these challenging terrains. Motor planning is defined as “the ability of the brain to conceive, organize, and carry out a sequence of unfamiliar actions.” That is exactly what was required step after step (often on wet rocks). Individuals can be in the best endurance shape, but if they lack advanced motor planning, problems will occur with such arduous routes. That is why jumping rock to rock is as much a mental task as it is a physical one.

After these three weeks of hiking and running in the mountains, I feel ready for the Grand Canyon on September 15th. I will be traveling in the weeks leading up to the run at the Canyon, but will post a blog on my return from Arizona. Hope you all have a great end to your summer…